CAMERADOS CELEBRATE 100 SPOON ROOMS: HOW PEOPLE FROM AROUND THE WORLD ARE GETTING THROUGH THE PANDEMIC WITH WOODEN SPOONS

The Camerados movement has been holding online events called ‘Spoon Rooms’ since lockdown began over a year ago. In June they celebrated their 100th Spoon Room! In that time hundreds of folk from all over the world have been getting together online to chat and be alongside each other, throughout the pandemic and in life.

Tony from London has been coming to Spoon Room for just under a year: “I use the space to be quiet, share, reflect, connect…whatever is needed on a Wednesday evening or Saturday morning. I like that each week is a reset, it doesn’t matter if someone has never been before or goes frequently, each Spoon Room is stand alone. It’s a safe space to admit my failure without anyone, including myself, trying to fix me. Just a space where we can be alongside each other.”

Spoon Room is about strangers looking out for strangers across the world for whatever is going on in their lives. It exists for folk to know that there is a place to go every week where they can speak to strangers and they will be listened to and not judged – we know that this strengthens us and gets us through tough times.

“Spoon Room always brings you a treat and a gift and a connection that is always a surprise. I could liken it to going for a walk in the woods and finding your favourite stick which you didn’t think you’d find, you get a sense of belonging as soon as you make those connections.”  – Sam, a camerado living in Norwich.

Spoon Rooms came about as an online alternative to the movement’s Public Living Room’s: free spaces, open to everyone, where there is no agenda and no fixing. From Baltimore to Blackpool, they have been set up by local people in universities, cafes, community centres, on the streets of Camden and behind houses in Middlesbrough! They are spaces for folk to go on the good days and the tough. Camerados believe that we can get through tough times better, by looking out for each other in a more human way. 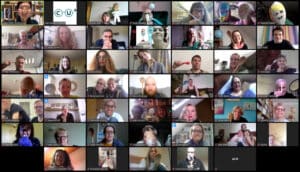 Anyone can be a camerado, it’s a behaviour thing. Being a camerado is about how you live on a daily basis and it’s based on six principles that help folk to be alongside each other and get through tough times better.

Camerados founder, Maff Potts believes that, “The public realm is divided into two types of places: places that sell you stuff and places that fix you. What if there was an agenda-free, no outcomes place where you could be what you needed to be and had permission to be rubbish? It’s amazing what happens when you come in without the intention of trying to fix people, just being alongside each other is enough. People often have the answers themselves.”

The success of Spoon Rooms in reaching people who are hidden behind closed doors, for many different reasons, has been a surprise for the Camerados movement. They’ve embraced this by developing more digital spaces, like House Party and Over A Brew. This has grown the movement, helped more people look out for each other and will continue beyond the pandemic. 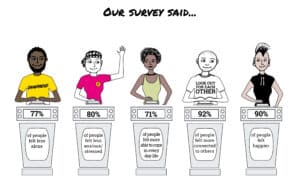 Prior to the pandemic, more than 100 Camerados Public Living Room’s had popped up across the UK and the world. In a report by Sheffield Hallam University, people spending time in a Public Living Room felt more connected, happier and less stressed.

Camerados was founded by Maff Potts in 2015. Maff spent 20 years as CEO of a number of national charities and Housing Associations and rewrote the UK government’s policy for homeless centres. From his time doing this work, Maff passionately believes that it’s ‘Friends and Purpose’ that makes the difference in how people get through tough times, and wants to use the power of social movements to make this social change. Camerados is supported by The Association of Camerados, a small team who work to inspire, resource and connect folk to grow the movement.