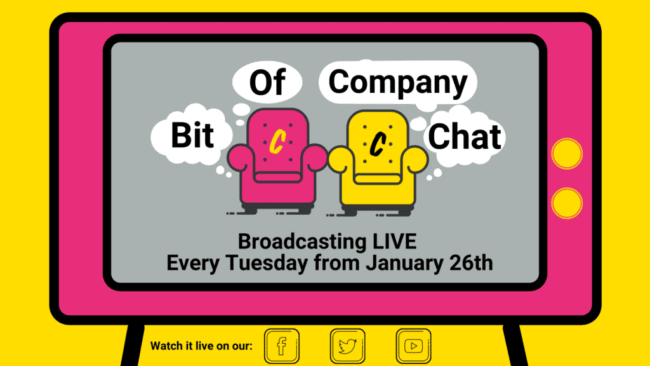 Starting on Tuesday the 26th is our brand new LIVE broadcast series, a #BitOfCompany Chat. Described as somewhere in between the Graham Norton Show and the Last Leg (well that’s what we are aiming for) a #BitOfCompany is a group of folk getting alongside each other (not literally) to chat about their experience through the pandemic.

Now there is no getting away from it, these are some pretty serious conversations, but our Movement eats these sorts of conversations for breakfast. The over earnest and intensely serious look isn’t one that suits us though; we like to keep things real and very human. So expect the unexpected and be alongside everyday folk telling their stories of these extraordinary times.

Streaming live on social media every Tuesday at 12 pm and 7 pm. Here’s a breakdown of all our episodes.

January 26th – The one about the birds and bees
Hosted by the legendary Catherine Wilkes with special guests Jamila & Brett.

February 2nd – The one where we’re all alongside each other
Hosted by Camerados founder Maff Potts with special guests Paula & Sam.

February 16th – The one where we’re not robots
Hosted by the wicked Chris Ash with special guests Ali & James.

February 23rd – The one where we mix with folk who don’t look like us
Hosted by the amazing Isaac with special guests Yvonne & Tony.

It’s a chat show, but nothing like you have ever seen before. Make sure to get notifications of when we are live on YouTube here. We are so honoured to be a part of the #EmergingFutures project and working with the legends that are Peoples Voice Media. Make sure to keep an eye on our socials and follow the #BitOfCompany hashtag to stay up to date.