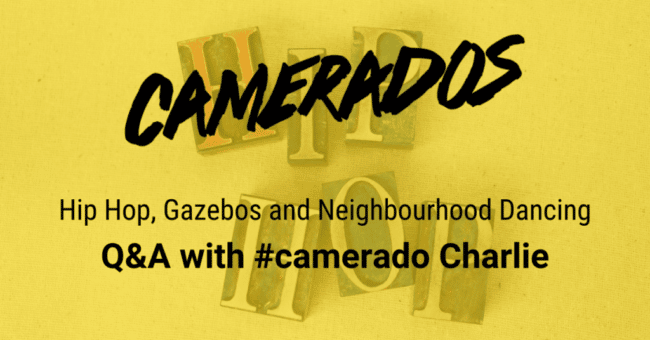 A few weeks back, Charlie from Walthamstow, organised a pop up public living room in her community. However, what we really loved was her adding her own twist and creating a hip hop theme that included socially distanced dancing and human connection. Last week at ‘A #BitOfCompany…Live’ the conversation around not seeking permission but just doing was an important discussion and Charlie’s PLR, is a perfect example of taking the #LiveDifferently message and making it her own. We decided to catch up with Charlie and ask her a few questions on how she pulled off this awesome event.

AOC: Hey Charlie, thank you so much for sitting down with us and having a chat! So you have had a pretty amazing journey in your life to reach where you are today, could you give the folks a little background on you and Blair Academy?

Charlie: Thanks for having me! Sure thing! So essentially, The Blair Academy (which is a social enterprise) is a culmination of my life experiences as a Hip Hop Dancer, homeless teen and carer for the Elderly.

At The Blair Academy, we envisage a world where Hip Hop brings Health, Happiness and Well-being to the lives of many so that we:

Since we launched in June 2018, we have engaged over 4000 people with Hip Hop Dance, across a multitude of settings, including care homes, schools and homeless shelters. We affirm the four principles of Hip Hop; Peace, Love, Unity and Having Fun.

AOC: Wicked! So how did dancing to hip-hop brings you to #Camerados?

Charlie: My social enterprise receives funding from ‘Unltd’ and I was lucky enough to meet Camerados Founder Maff at an event. I loved his work, and how he spoke about it. Our ethos aligns with that of camerados, and I love to organise events so I was desperate to get involved!

AOC: Times are pretty tough at the moment and many people would give up on the idea of bringing people together so setting up a Public Living Room is a seriously impressive achievement. Can you tell us about how you approached getting permission to do it and how you actually pulled it off?

Charlie: Pulling off a Public Living Room in these tough times was a challenge for sure and I was lucky enough to squeeze it into the gap before the restrictions regarding groups of 6 came in. There were two groups that I couldn’t have done it without: I teamed up with the William Morris Big Local who were curating an outdoor event and were happy to incorporate the living room. The furniture was borrowed for the day from our local British Heart Foundation shop

With the event being outside, we were able to space things out under gazebos and create little zones. Then, of course, there was plenty of hand sanitiser to hand, as well as masks and cleaning equipment. We also had single chair covers, for hygiene, which also meant people could take them away with them as a reminder of the day.

I grew up where I held the event, so I was lucky to be able to pull on old neighbours and friends for support. We had Walthamstow’s own ‘Auntie Maureen’ with her gramophone who got us all grooving and then we took it into some Hip Hop moves and grooves. I love intergenerational aspects to events.

We had a gift bag for everyone who came along which included more information on how they can become a camerado and get involved with the movement.

AOC: We like to think that our principles are pretty relevant to folks around the UK and the globe, so what was the reaction like from the those in the community? Did they resonate with the principles?

Charlie: Everyone was super excited to see people face to face which was lovely. The chance to converse with randomers was missed for sure and everyone really embraced that at our event. For some people, it was the first time they had left the house since the pandemic began. We didn’t try to fix anything, or anyone, we just got them together – and got them dancing!

AOC: So despite you being a big fan of hip-hop, why did you decide to theme your PLR around this genre of music? And how did you come about adding your own flavour to the PLR?

Charlie: I try to feed Hip Hop into anything I can to be honest! It comes from a place of giving marginalised groups a voice and celebrating the differences between us. I think we need more of that in as many spaces as possible! It’s also great for mind and body for us to move in a social setting, having a laugh with other people. It’s good for the soul!

AOC: Despite all that is going on at the moment, are you planning to do another PLR?

Charlie: Oh, for sure! I’m a force to be reckoned with. Covid-19 can’t stop me. Watch this space!

AOC: Another thing I have heard through the grapevine is a meeting between you and AOC’s arts and activism lead Catherine – have you got any plans cooking?

Charlie: We do indeed! We are both creatives so again, watch this space!

AOC: I’m a pretty big hip hop nerd so I am gutted to have missed this but one last question that we are all thinking: Notorious BIG or Tupac?

Charlie: Ohhh guys! It has to be Tupac for me!

Thanks, Charlie, you are a true #camerado!