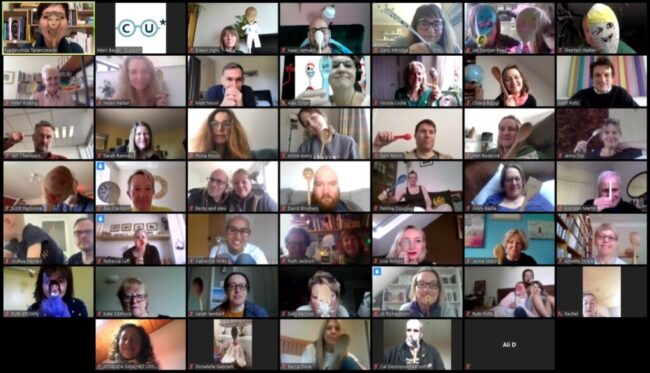 How we get through tough times needs to change.

Divide and conquer and then the few will reign powerful, wealthy and connected. Divided the rest of us will remain small, in our echo chamber, pitted against each other.

and on and on it goes until we can’t think straight, can’t see the woods for the trees, can’t remember what’s important anymore. Can’t work together to get things on track again.

We sit together but not looking, we’re alongside each other but not listening and we wonder why we all feel so ill in the head. Isn’t it time for the person who feels so small, insignificant and troubled to have a way of getting through the tough times, isn’t it time for communities to understand they have the power, the tools, the voices to better their lives?  It’s not the system, the government or world leaders, it’s those we spend our lives around, the people in our homes, on our streets and those strangers we stumble across.  They’re the ones who make our lives better, give us purpose and lift us on those dark days.

Why were we so surprised that clapping on a Thursday night took the nation by storm, had everyday people setting their alarms, joining with smiles those they’ve lived beside but never spoken to. Why did a lump appear in our throats when we first started doing that?

It was relief, relief that we could show our humanity without being judged, the sense of coming together house by house, street by street all with a common goal of thanking those ‘ordinary’ people for doing the extraordinary, not our politicians, not our celebrities, not our millionaires, it was for those everyday people who actually have the power; the doctors, the nurses, the Tesco’s driver and the bin men. These people are our camerados, the folk who really look out for us. They have our back when times are tough and on those Thursday evenings we wanted them to be successful, successful in their work, in their lives and in their health AND we wanted that for ourselves and  each other too.

Why would we let that feeling go? Why would we return to the old way of behaving, divided, suspicious and without a voice?  Don’t we want a better way?  And there’s an answer no matter how cynical you are.  It’s not a religion and it doesn’t cost anything, it’s simply about being more human to one another, more connected, more available, less judging and more accepting of when we fail (because we will) and having places to go when we just need to be alongside our fellow man with no-one selling, no  judging, no performance table, just one person alongside another?

If this sounds Utopian, it’s not, it’s just a way of living and unsurprisingly the more you practise the easier it gets. It’s definitely not a religion and it’s definitely free, it’s about behaving differently but without a government diktat telling us what we have to do.  It’s a choice we can all make, some will and some won’t that’s the truth of it but those who behave like camerados to others will, over time start feeling stronger within themselves, more connected to those around them and with a sense of purpose that gets them through when the inevitable tough times arrive.  It’s about living not winning, wanting others to be successful, accepting we all fail, asking those who are struggling to help us, making an effort to mix with those who don’t look like us and when times are scary make as if they are good days and inject some fun.

These are the tools we know work, they bring people from across the globe together, human to human, one ordinary person alongside another, one stranger giving time to another and that’s where the magic is.  That’s when people get well, talk about what’s bothering them, begin to build trust with strangers and see they have the power to change their lives.

Why wouldn’t you do that now?