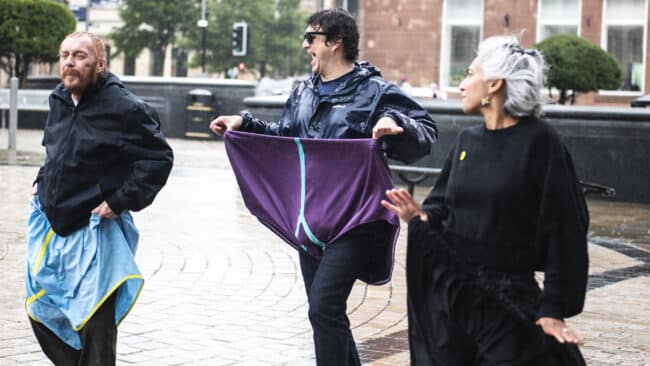 From Pandemic to Pants-demic: the Camerados ‘When Life Is Pants’ Tour is coming to Greater Manchester!

Look out for people dancing in giant pants and find out how Camerados founder, Maff Potts, thinks we should all be getting through ‘pants’ times. 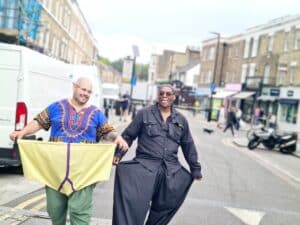 Folk who are part of the Camerados movement will be coming together in their local areas
across several of the boroughs of Greater Manchester on Thursday 11th and Friday 12th
November. They will be walking and dancing around the streets wearing giant pants and
asking: “When life is pants, what gets you through?”.

Ali is a Camerado living in Wythenshawe who will be coming along to wear giant pants on
Thursday:

“Just before the pandemic, we were all set to do our first Public Living Room in
Wythenshawe but we had Lockdown and that was that. It’s time to kick things off again and
what better way than Camerados on the Streets in Greater Manchester. I can’t wait to see
what the people of Wythenshawe make of it, especially the big pants!”

The ‘When Life Is Pants’ tour, a conversation with Maff Potts 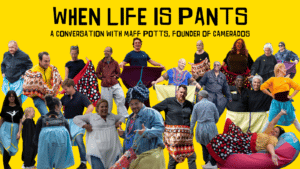 On the evening of Thursday 11th, Camerados founder, Maff Potts, will be in Rochdale for
the “When Life Is Pants” tour, everyone is welcome, so come along and have a chat to find
out more about the Camerados Movement. You may be surprised how easy it is and how
little you have to do to make a big difference for yourself and your neighbourhood. (And you
can keep your pants on!)

Maff Potts is a custard cream fan and founded the global Camerados movement in his
bedroom 6 years ago after 20 years running charities for people with very tough lives,
advising the Government and even turning the Millennium Dome into a homeless shelter.

This is a conversation about all the mistakes and hilarious things that happened when
creating Camerados public living rooms from Baltimore to Blackpool, from NHS hospitals to
the Brooklyn Bridge and some massive light bulb ideas that you can use too.

Come along to the ‘When Life Is Pants’ tour in Rochdale at the Better Together building,
7pm on 11th November for a natter with Maff Potts, founder of the Camerados movement.

Some folk in Greater Manchester have set up Public Living rooms: agenda-free spaces, open
to everyone to go for a chat and a cuppa with no judgement and no fixing, like Marple Public
Living Room, which is open every Thursday! While some folk just take the 6 Camerados
principles into their daily lives. Anyone can be a Camerado, it’s a behaviour thing and it
changes and saves lives.

There are local Camerados from many boroughs across Greater Manchester and the
country! So, if you’re in Greater Manchester on Thursday evening, come along to the ‘When
Life Is Pants’ tour and find out more about the movement of people who give a damn.