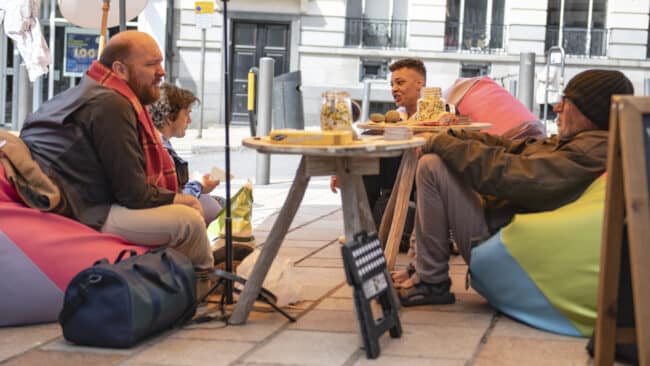 PANTS! PANTS! PANTS! Camerados are hanging pants on the streets of Wolverhampton on Friday 6th August, because when life is ‘pants’ being a camerado gets us through.

The pandemic has shown us that even when life is ‘pants’, we can get through tough times by being a camerado. On Friday 6th August, camerados of Wolverhampton will be out at Queen Square. Come along to dance, take great selfies, or just to have a chat. Be a #camerado, because when we have fun together, it makes a difference.

Camerados are on the streets in Wolverhampton as part of #WEMakeOurCity hosted by Wolverhampton For Everyone (WE), part of many activities at the Mander Centre Community Hub from Mon 2nd – Sat 7th August. WE are creating a safe and welcoming space where people across Wolverhampton can take part in activities and connect with one another.

A Camerados Pop-Up Public Living Room will be part of the week, open Mon 2nd-Sat 7th, 10am-3pm, in the Mander Shopping Centre. This, along with the camerados street activity, is a chance for local people to connect and look out for each other, a place where nothing is expected but everyone is welcome, to meet new people and find out about the movement.

Life has been ‘pants’ this last year, but camerados in Wolverhampton have been getting through it together. When life is pants, be a camerado; it gets you through tough times. Folk who are part of the Camerados movement look out for each other, online and in person. Anyone can be a camerado, it’s a movement guided by six principles and they are things you can do in your daily life. 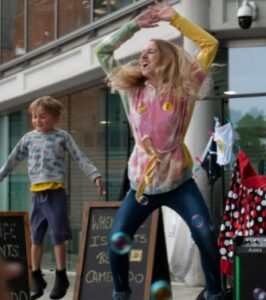 “The way we meet, mix and mingle has changed, but we have all learnt during the pandemic how important it is to look out for each other. So we are going to create a beautiful space, all about meeting people and being camerados”. Catherine Wilks is a camerado living in Leicestershire. She is the arts and activism lead for the Association of Camerados (the supporting organisation for the Camerados movement) and has been preparing to come to Queen Square along with folk from Wolverhampton who are already part of the movement.

“Wolverhampton was about to convene our first Public Living Room in March 2020 as part of the first iteration of We Make our City but, due to the pandemic, we had to cancel it”  says local camerado, Saffi, “We are so excited that 17 months later, not only are we finally hosting our first Public Living Room, but Camerados are coming together On The Streets to connect and celebrate!”

“WE Make our City 2021 is all about celebrating what is great, creating the conditions for a kinder, more playful and better connected city and people experimenting to create the city they want to live and work in.”

More than 100 Camerados Public Living Rooms have popped up across the UK and the world since the first one opened in Sheffield in 2016.

It’s all about being more human, having a laugh and having each other’s back, without agenda or judgement. Anyone is welcome, not everyone will get it, but if you do, or you want to find out about the growing Camerados movement, come to Queen Square on 6th August and share how life can be pants. 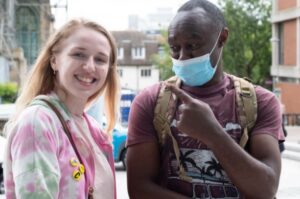