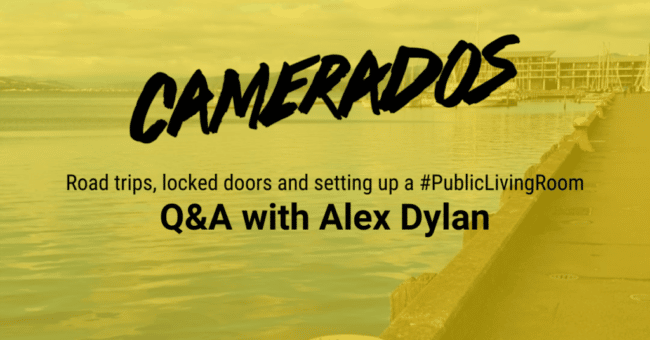 Being a #camerado is as simple as just being there for each other, however sometimes even we are amazed by the actions of those in the movement. The most recent example of this is Alex, who had organised to put on her first pop up Public Living Room at Hettanz conference 2020 in Wellington, New Zealand. However, like most plans made in these crazy times, it was announced that Auckland, where Alex lives and works, was going to be put back under lockdown restrictions, after almost 100 days Covid-19 free. This meant that all commercial flights were cancelled and left Alex in a situation of unknowns. It is here that many would (very fairly so) give up on their plans and move them back to a time of more certainty, however, Alex did not. She decided to instead embark on a 14-hour round trip from Auckland to Wellington, to ensure that she could reach new camerados at the conference.

We wanted to have a chat with Alex and learn more from her amazing experience.

AOC: Hey camerado! Thank you for chatting with us! You recently went on a pretty epic journey to put on your first Public Living Room, before we get into that, why did you want to put one on in the first place?

Alex: I first found Camerados via Twitter. Maff Potts and the disruptors were decorating bus shelters for Christmas. I thought it was a brilliant idea to combat loneliness. As an immigrant in a new country, I know how hard it can be to meet people when you have no network of family or friends to support you.  It takes time to find people to connect with and every social interaction requires a leap of faith. At first, I thought the Public Living Rooms were just a UK thing. If I am really honest, I thought they were simultaneously bonkers and terrifying – I mean, who wants to hang out with a bunch of random strangers?!   Thank goodness other people are braver than I am!  Twitter is great for me because even though I am half a world of time zones away, I can catch up in my own time and still feel connected. I joined in with the #SpoonRooms because the whole country lockdown in New Zealand was really isolating. The best and the first friend I had made in New Zealand died abruptly from an aggressive cancer we thought that she had already beaten 10 years ago. When you are locked up with only your own thoughts for company, the people you miss the most are the ones you have no hope of seeing again. Having no hope becomes a state of being and just paralyses you.  #SpoonRooms became a place where I could just hang out with different people without feeling judged.  It was a leap of faith that prompted me to want to hold a #PublicLivingRoom so that perhaps other people would also find some hope.

AOC: So when you decided that you wanted to do one, why did you choice Hettanz Conference? And what were some of the things that you had to arrange in order to do it?

Alex: HETTANZ is a professional support organisation for teachers. I think everybody knows that teaching is a stressful job. After all, if it were easy, well-paid, with lots of holidays and great bonuses, everyone would want to be a teacher and there would be no supply crisis! As they say here yeah, nah.  I have run professional development workshops for HETTANZ in previous years.

In New Zealand, we have a model of well-being called te whare tapa whā. This model acknowledges that there are 4 aspects to health, including family wellbeing and mental wellbeing- or as we say in #Camerados – Friends and Purpose. It seemed like the values of both organisations aligned.  Given that HETTANZ members are the teachers charged with teaching about wellbeing, I reasoned that we could flip the learning model and teach the teachers!

In order to get permission to include a #PublicLivingRoom as part of the annual teacher conference, I had to present to the Executive and advocate for #Camerados.  Once the organising committee could see what it was all about, they were quite enthusiastic because they understood about the need for teachers to think about their own wellbeing. The idea of connecting with different people that you may not have met previously and created new friendships with mutual support also seemed like a great way to get strangers talking together.

Camerados.org in the UK were magnificent in their organisation of the #PLR in a box.  I had to have a live stream with all the Executive all over the country to show them what was in the package!  It was so exciting! The concept is really well organised – very humorous and yet thoughtful.  Our favourite parts were the labels and the biodegradable packaging.

I planned to fly down to Wellington for the Conference so I had to work out weight allowances, whether I could courier something to the venue (expensive!)on, or whether I could fit it into a suitcase with the baggage allowance (Yes!).  I also had to liaise with the Conference events team to make sure that they allocated a suitable area.  My biggest concern was where to find couches and cushions in a University Science building!

AOC: Now putting on a Public Living Room is already pretty awesome, but the perseverance and commitment you displayed was really amazing. When it was announced that Auckland was going back into lockdown what were your thoughts and what was the tipping point for your decision?

Alex: A whole rush of emotions- disbelief, anger, sorrow, anxiety – all the good stuff! We were scrambling for 72 hours – trying to work out if I could fly from anywhere else if there were flights available, how much would it cost, would we be able to continue at all? I don’t think anyone slept for 3 days.  I was outside Auckland at the time, so I didn’t need to go into lockdown but I also had no way to transit through. My kids live and work in Auckland and I was worried about how they were going to manage as well.

I also wanted to take some cookies from my friends the disability bakers at The Cookie Project.  As soon as the lockdown was announced again I knew they would all be shielding.  I wouldn’t be able to collect cookies from them and a courier wouldn’t make it in time. In any case, the police and army put up roadblocks and no one was allowed in or out of Auckland.

Fortunately, the Cookie Project has an online DIY option, and I had already laid in a supply.  So I asked my husband to bake up loads of batches to take with me. #nomnomnom

I think the tipping point was the determination shown by the HETTANZ organising committee- a combination of “If you build it, they will come ” meets “The show must go on”.  That really resonates with me and I am relentless in my commitment.  There were no available flights at all.  If it was going to be, it was up to me.  So I knew that the only way I could make it was to drive.

AOC: So you are in Wellington, you have this space to fill, how long did it take? And what was the atmosphere like in the public living room?

Alex: I was at the venue at 7.30 am ready to set up.  However, the doors were on an automatic timed lock and didn’t open till 8. Fortunately, Wellington is renowned for its excellent coffee – great to keep me warm on a chilly day (only 3 degrees- it’s winter here!).  My biggest concern was that I would run out of time and not be set up when the Conference opened.  I needn’t have worried – I asked some #Camerados to help and they did everything from programming the fairy lights to moving the chairs.  A wonderful woman, Sue Hannaway, had even brought along some mindful colouring sheets and pens.  Everyone was so excited to help set up and create our “Camerados Corner” to welcome people.

AOC: Camerados is a new movement, starting in the UK, but we feel the principles are applicable globally, did they resonate with those in your PLR on the other side of the world?

Alex: Absolutely.  Friends and Purpose is a universal mantra. I thought the hardest part for teachers to grasp would be the “no fixing” bit.  Turns out it’s quite liberating.  People really appreciated having space to have a conversation and be heard.

AOC: Did you have any problems or difficulties that put you on the backfoot?

Alex: We were a bit anxious about the whole physical distancing requirements but everyone managed themselves really well.  Legally we couldn’t provide facilities to serve tea and coffee within the space. However, people could make their own in another space and then bring it with them.  That worked well – thank goodness!

AOC: Lastly, how would you sum up your experience and what would you suggest to others looking to set up a public living room?

Alex: It seemed like it took like such a long time from the idea to the delivery but it was totally worth it!  To anyone else who is hesitant – feel the fear and do it anyway!  The comments and responses from people who came were so validating.

AOC: Is there anything else you wanted to add?

Alex: There’s something really special about the PLR – it creates a space where people can feel comfortable in ways they never previously imagined and deal with stuff in a real and respectful way.  It is such a positive thing and I am really grateful to have had the opportunity not only to experience it myself but to have shared it with others.

Thank you so much Alex, you are a true camerado!

#Friends and Purpose, my dude!

If you want to find out more on how to create your own #PublicLivingRoom, get in contact through our Join us page  or send an email to office@camerados.org.