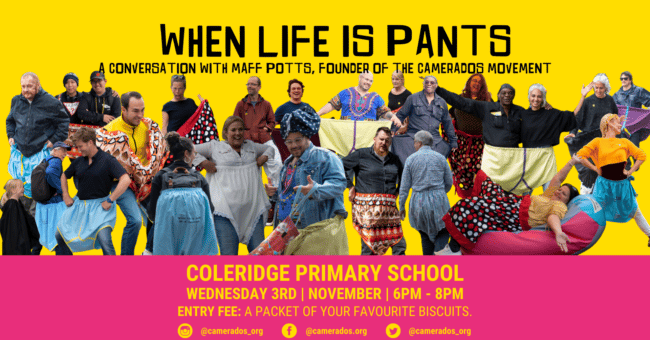 The Camerados ‘When Life is Pants’ Tour is coming to Rotherham at 6pm on Wednesday 3rd November!

Find out the story of Camerados in Rotherham…

Come along to the next stop on the Camerados “When Life Is Pants” tour at 6pm on Weds 3rd November at Coleridge Primary School, Rotherham. Have a chat with Camerados founder Maff Potts and find out more. You may be surprised how easy it is and how little you have to do to make a big difference for yourself and your neighbourhood. (And you can keep your pants on!)

Maff Potts is a custard cream fan and founded Camerados in his bedroom 6 years ago after 20 years running charities for people with very tough lives, advising the Government and even turning the Millenium Dome into a homeless shelter.

This is a conversation about all the mistakes and hilarious things that happened when creating Camerados’ public living rooms from Baltimore to Blackpool, from NHS hospitals to the Brooklyn Bridge and some massive light bulb ideas that you can use too.

This isn’t the first time Camerados have been in Rotherham, back in August Camerados from Rotherham and from afar, came together in Clifton Park to dance, chat and look out for each other as one of many locations of Camerados On The Streets activity. On the day in Clifton Park, school kids and teachers from local Coleridge Primary School came along to dance and talk about what gets them through ‘pants’ times. Coleridge school was part of the Camerados School project where Camerados principles are an everyday part of school life.

The ‘When Life is Pants’ tour will take place at 6pm on 3rd Nov at Coleridge Primary School.

Folk from all walks of life came to hang out in Clifton Park, they felt that spaces like the one set up by Camerados that day are really needed in Rotherham.

A local guy stopped by, he was having a rough day and his mum had recently passed away. He was upset and angry. He spoke about tough times in his life that he and his family had been through, from cancer to depression, hospitalisation and deaths in the family. He has children and grandchildren and sees them regularly to take the kids chocolate. He laughed and danced to Northern Soul and cried about the pain and loss he’d suffered. When he left he said: “Thanks for today. We need more of this.”

In November, Camerados founder, Maff Potts is making the next stop on his “When Life Is Pants” tour, following his first stop at the Camerados Public Living Room in Wolverhampton, to have a natter with the good people of Rotherham.

Now more than ever, we all need to be camerados to each other. In a world which is so divided, we know that we’re stronger together and that places like this are needed. Spaces where everyone is welcome, and which are free from agenda and judgement.

Local camerados are setting up Public Living Rooms all over the world as spaces for folk from all walks of life to chat and connect, and it changes and saves lives.

Pop along to the Coleridge Primary School at 6pm on Monday 3rd for the “When Life Is Pants” tour and find out more about the growing Camerados movement.