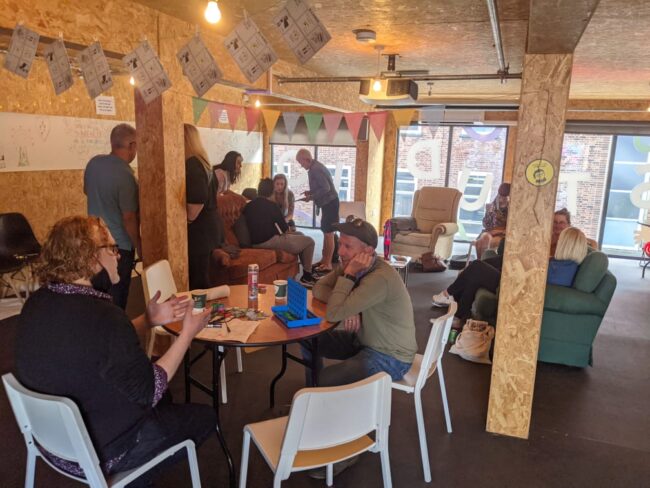 Camerados in York are opening a Pop-Up Public Living Room in Spark on 7th & 8th July. A space to be more human, with no agenda or fixing.

A Pop-Up Camerados Public Living Room is opening in Spark on Wednesday 7th and Thursday 8th of July. Part of a network of Public Living Rooms across the country, open to everyone and set up by local people who are part of the Camerados movement. Camerados believe that we can get through tough times better, by looking out for each other in a more human way.

This Living Room came about as part of the Systems Changers Programme which is facilitated in York by the Multiple Complex Needs Network. This programme has been keen to break down the barriers of ‘us’ and ‘them’, treat one another as equal humans, all with individual needs but also the ability to provide something to others.

“We wanted to create somewhere for everyone to get together, where there were no lanyards or referrals, just people in a room, connecting. And then we came across Camerados and we knew we had found a wider connection to like-minded people all over the world!”

Public Living Rooms are human spaces for folk to be alongside each other during the good times and the tough. They are places to meet new people, have a chat and a cuppa with no agendas and no fixing.

The first Public Living Room was set up in Sheffield in 2016. Since then folk have been setting them up in their communities across the UK and the world. From hospitals to universities, from prisons to libraries and community centres to cafes. Over this time, thousands of people have benefitted from connecting and looking out for each other.